It’s nice to be a contributor to #MAVOIX, but apart from the celebrity, the salary level and the company car, there are not only good sides, far from it.

Do you find it normal, you spend hours on the streets talking about citizenship while there is Hanouna on TV? Do you find it right to have to attend an information meeting on a UEFA Champions League night?

And we will not make anyone believe that walking bitumen decked with a fluorescent yellow vest is a sign of civic emancipation and dress.

On this subject, I have a truthful anecdote to tell you.

Not later than a long time ago, after having bragged in the streets of Nantes accompanied by a troop of happy musicians; after having smoked the whole of a restaurant with our generator: sorry guys, it’s for democracy (!); after making a video projection night, wall and sound at a time …

This is a night, wall and sound video projection at a time.
While we were busy putting away the material, a man came towards us, more young and vaguely staggering at this late hour. A dialogue a surrealist nothing committed:

– And why are you asking us that?

– Well, with your yellow vests, I thought you were cleaning pros (laughing fat)!

– Yes, but we are cleaning up democracy.

And he left. Without even saying thank you.

But I go astray.

I also wish to lodge a complaint concerning the draw of May 6 in Paris. Why organize a complicated carpool system while others go to their private jet meetings? And the guarantee of being drawn, huh? When we think of the number of candidates who made the trip for nothing. Thanks for them.

The #MAVOIX campaign also revolutionized the means of transport.
In addition, even if it has nothing to do, I draw your attention to the fact that we had to fight for months with open-source folk software, Framacalcs, Framadates, Framapads, Framabidules, Framatrucs (and others “diableries computer” as rightly pointed out a contributor whose name I will not say).

Well for sure, I’ve made tremendous progress in digital tools, but that’s not a reason.

Joy, well-being and citizenship.
And then I’ve seen people do incredible things, at best useless, which I sometimes had the weakness to participate: tag the sidewalks, spend 24 hours nonstop in the street, design a voting platform, adopt a panel, tie knots with woolen threads, hold raffles, project pictures on buildings, film his mouth, go up to Paris with a donkey, recruit deputies for an ad, write songs, give yellow roses to passers-by , stick posters to the bomb, customize his profile picture, tan through a poster, laugh, sing, dance, party.

You will resume a little direct democracy?
And it does not stop there: crisscross the city in yellow Mehari, participate in a national draw, create courses on the internet, ask people for money, re-dub a movie, open an account campaign, take part in a flashmob, hand out leaflets, hang out, get down to fifty to write a text, make stickers, create animated gifs, find a printer, sell plastic cups, pick up used posters, write #MAVOIX on sand, a dock, walls or any other support that has not asked for anything, become a financial agent, public speaking, draw, film, photograph, create, share. A little serious!

But all this is nothing next to the poster …

Was it really necessary to incorporate a mirror, a source of astonished questioning by passers-by, a permanent invitation to dialogue, moments of true complicity?

A mirror poster that is unanimous.
Now that the first round has passed, I will finally be able to resume a normal life. Except, that I do not know what it is, me, a normal life !!!

It’s clever. And it’s your fault, too!

But I love you anyway, all and all;)

So, very soon for new adventures! 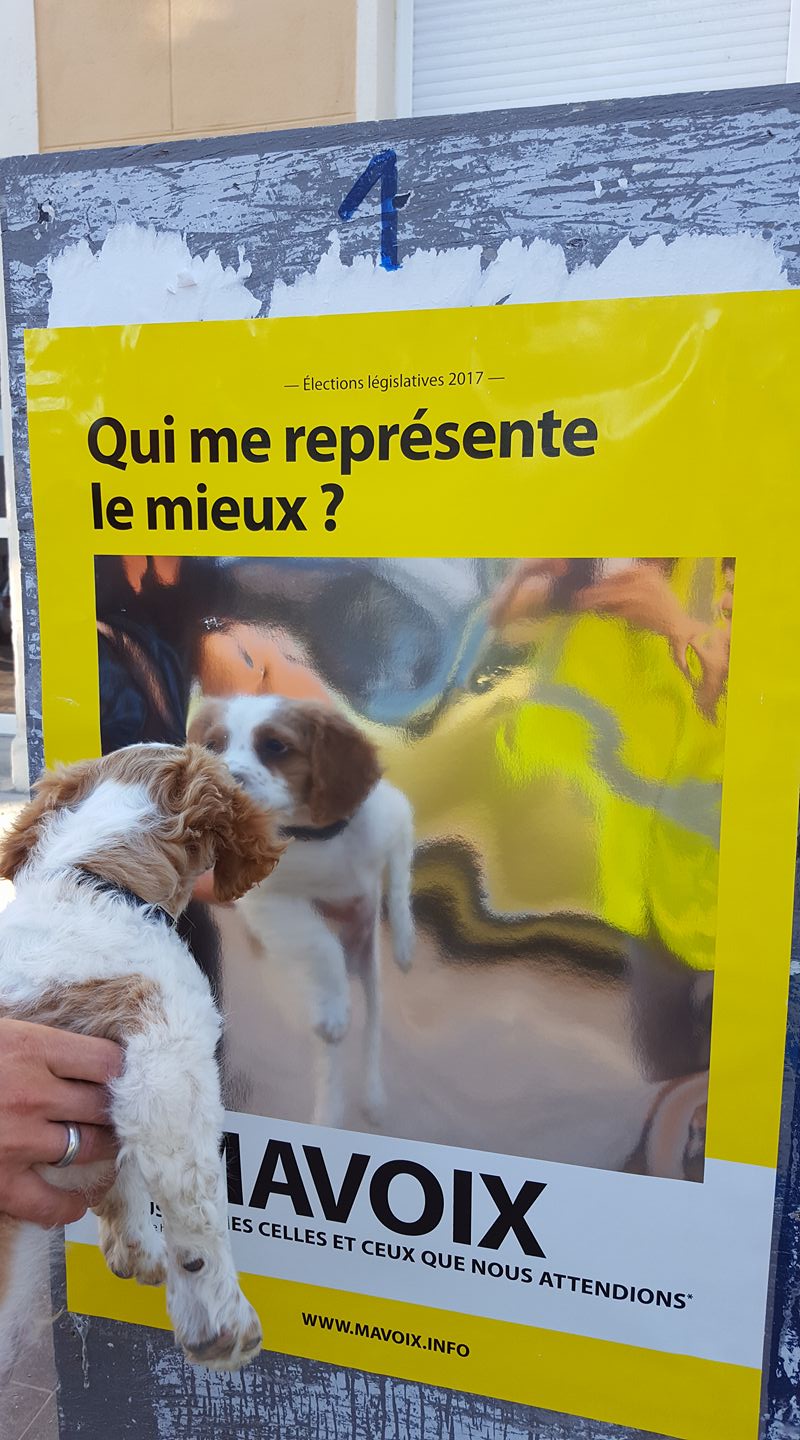